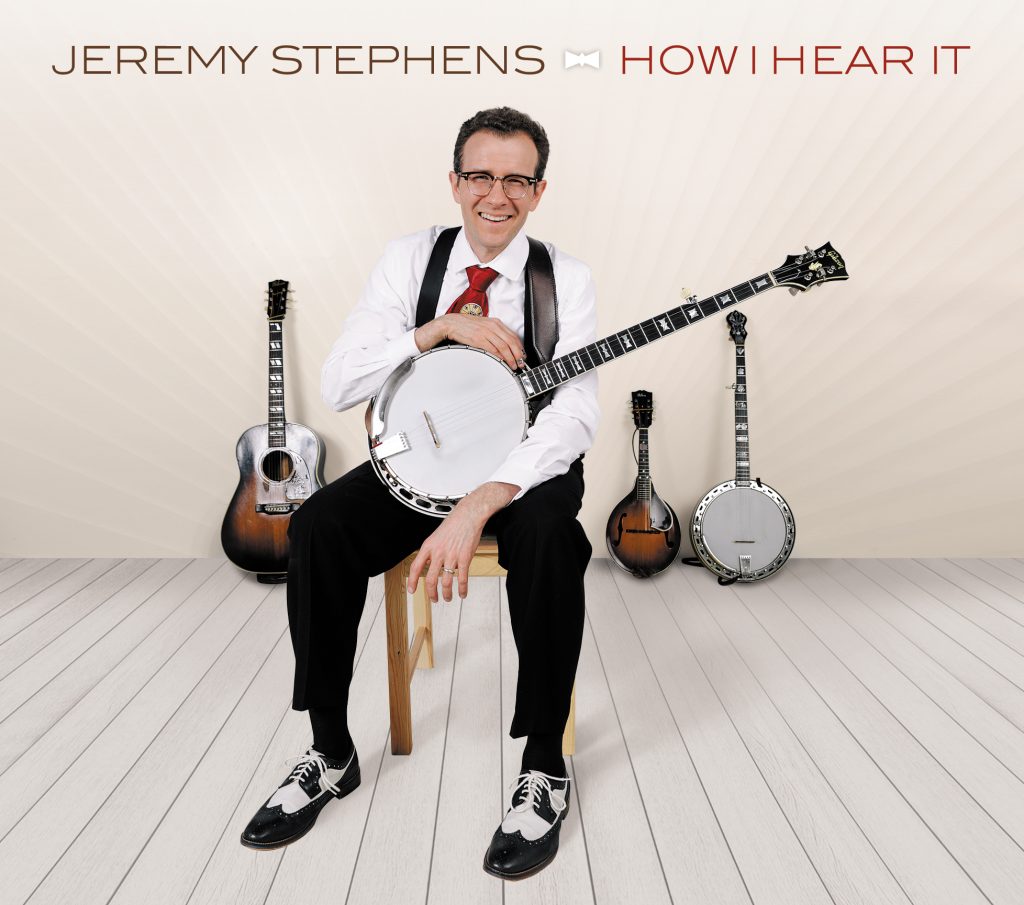 BUY ALBUM
Jeremy Stephens returns to Rebel Records with a masterpiece in How I Hear It, his second solo project.  This album provides not only an exciting auditory experience, it delivers a musical education.  One would expect no less from an artist who is not only a world-class musician, but a musical historian and scholar.

Stephens, whom bluegrass audiences will recognize through his work with high profile artists including High Fidelity, Jesse McReynolds, and the Chuck Wagon Gang, began his musical journey at the age of five.  Growing up in Virginia, Stephens was exposed to the rich musical culture and history of the region.  This exposure formed a love and passion for the bluegrass, old-time, and related music which he heard.  The sounds he heard with his ears have been woven into the fabric of his mind and heart, and translated through his hands.  Jeremy says, “I’ve been greatly blessed to have had some really special mentors in my life who have shaped who I am and the music that I play.  How I Hear It is the music I love; played and sung the way I hear it.”

The listener of this album reaps the benefit of Jeremy Stephens’s love and commitment to his craft.  As stated earlier, this is an education.  Perhaps it could be said that How I Hear It is a tutorial on the musical mind of Jeremy Stephens.  Whether it is a blistering banjo instrumental such as “Sockeye”, a cross-picking mandolin showcase like “Lady Hamilton”, or the tasteful guitar stylings in “You’ll Be Lonesome Too”, Stephens’s admirable versatility and mastery of each instrument are on full display.  Along with his instrumental prowess, Stephens’s vocal chops are front and center.  “I’m Lonesome” is a solo feature which demonstrates his smooth lead vocals.  Numbers such as “Since Wedding Bells Have Rung” and “Beautiful Blue Eyes” show how he is equally comfortable singing tenor.  Coincidentally, both of these cuts have guest lead vocalists to add nostalgia to the performances, not to mention great singing.  “Since Wedding Bells Have Rung” was recorded by Don Reno in 1966 on his A Song For Everyone album.  The original track featured Don’s son Ronnie Reno singing harmony.  Fifty-five years later, Ronnie is singing lead on this very song.  A truly special moment.  “Beautiful Blue Eyes” was recorded by Red Allen in the 1960’s with Don Reno playing banjo on the recording.   Jeremy recruited Danny Davis, a singer whose voice is as close to Red Allen’s as you’ll ever hear, to handle the lead vocals on this song.  Danny’s resemblance to Red Allen is almost eerie, but his delivery totally captures the feel of the song.  Yet another standout track on the album is “The Bells of St Mary’s”.  The song was featured in the movie, The Bells of St. Mary’s.  The tune’s unique chordal arrangement presented on Stephens’s album replicates the arrangement from the film.  The banjo playing on this song proves that the banjo can be an instrument of subtle beauty and elegance.

Jeremy Stephens’s talents stand out on How I Hear It.  However, the band Stephens has assembled for this remarkable album is of the highest quality.  Stephens recruited some of the best in the business to join him on the project.  Among these is dynamite fiddler Corrina Rose Logston.  Corrina plays fiddle and guitar on the album, and also sings some beautiful duets with Jeremy.  Corrina is Jeremy’s wife, as well as band mate in High Fidelity.  The two have etched their place in bluegrass music as one of the top vocal duets on the scene.  On guitar is David Grier, one of the most influential guitarists of his generation.  Top bass player and in-demand session musician Mike Bub handles the bass duties on almost the whole album.  Hunter Berry, long-time fiddler for Rhonda Vincent & The Rage, contributes his strong Benny Martin influence to the recording.  Rounding out the album is ace audio engineer Brad Benge, who recorded, mixed, and mastered the project.  Benge also plays bass bass on one song.

“Twenty years has passed since my first solo project, Scarlet Banjo. In that time, I’ve grown considerably as a musician and singer, and I felt it was time to make another solo album as a picture of where I am today in my musical journey”, says Jeremy Stephens.  One may hear tunes, songs, or arrangements he or she has never heard before.  That’s all part of the education; Jeremy Stephens specializes in bringing obscure material to life.  No doubt, the listener will be happy with how Stephens hears (and performs) the music that molded him.  Sit back and take notes while How I Hear It plays through the speakers.  Class is in session.